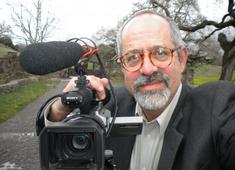 From News to Music Videos to Documentaries

Larry Nimmer has spent the last 40 years giving people a platform to express themselves – through network TV, newspaper columns, film festivals, live events and more recently, the social networks.   Nimmer started his career as a News Producer/Director at the CBS Affiliate in San Francisco, KPIX-
TV where he helped to develop the “news magazine” format in the early 80’s.  Following his stint as a news producer, Nimmer became a music video Producer/Director and helped to develop the “rock video” format with early ground breaking music videos featured on MTV.  He was also recognized for his outstanding “cutting edge” work by Billboard Magazine.  In more recent years, , Nimmer has had a successful career producing  documentaries, commercials and entertainment specials and has won several Emmy nominations for his work.   Nimmer has also had a successful career mentoring young filmmakers.  Nimmer was the founder of The International Student Film Festival which has featured award winning young film makers from such diverse places as Belarus, Zimbabwe and as well as all the Western Countries.  Many of the films Nimmer curated have been featured on cable and network TV.   Along the course of Nimmer’s career, he has worked with many celebrities.  Perhaps the most famous of them is Michael Jackson who hired Nimmer to make a film about Neverland Ranch which became the award winning film, “Michael Jackson: The Untold Story of Neverland”.

Nimmer is also responsible for these following organizations:

Everyone Has a Story